Faery Folk have long been known to appear in my dreams on occasion and when they do, I feel a certain importance and magic has visited me. I feel blessed by their presence which often is accompanied by mystery & shenanigans. One such dream came recently, when contemplating a trip to Ireland in the coming year. I used dream incubation and put the question to my dreams to find out if this was a good idea. Dream incubation is a core practice in Active Dreaming and can give one access to deeper levels of reality and the deeper wisdom of the soul, when dealing with life’s challenges and questions. The dream which came was an immediate response to my question. I share a couple of related dreams here following the steps of the Lightning Dream Sharing Process, which is also a handy way of recording in your dream journal and exploring your own dreams or sharing with others. 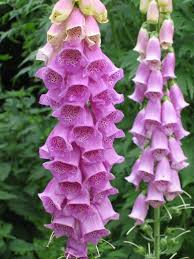 I see two purple flowers growing in a forested glen and my awareness comes closer in the dream to see them. I become aware these two flowers form a small gateway into a faery realm, where I now hear the voices of faeries chattering away in excitement. I cannot see them, but can hear them. I am told the flower on the left is for me and the flower on the right is for my partner.

Feelings upon waking – Excitement! A confirmation of going to visit Ireland, as the land of my Ancestors and Faery Folk.

Reality Check – In response to my dream, I did look up foxgloves to see what connection they may have to Faeries or Ireland. I learned Foxglove Flowers are known to originate in the British Isles and closely associated with Faery folktales. The flowers are also known by the names, Folkgloves (The Good Folk), Faery Fingers, Faery Bells, Faery Caps, Thimbles of the Sidhe or The Plant of the Faery Woman.

Action Plans – Re-Enter my dream to travel through the gateway of the Good Folk, and ask for the assistance of fox as a guide. Make travel plans to visit Ireland in the coming year.

In folk tales, the Foxglove flower is said to get it’s name from how Fox was given gloves from the flower, which were placed on his feet by faeries, so that he could quietly slip by undetected by hunters and escape.

I had a fascinating dream years ago, which apparently was hinting at me traveling to Ireland, if not in physical reality at least in dreaming. In my dream I was drawn into what appeared to be a rib cage made of whale bones. The bones were ancient and had turned to crystal, and standing inside I could see strings of sinew between the bones. I passed my fingers across the strings and an otherworldly song was emitted. The whale harp became a dream gate with entrance into a magical otherworldly realm.  I placed my Native American flute at the entrance to the gateway and then picked up a tin flute that lay at the entrance before stepping through the gateway.

Reality Check – In subsequent research after having this dream, I discovered a folktale of how the Harp became a symbol for Ireland. It is said that a Queen was strolling along the windy shores of the Sea one fine day, when she heard a haunting sound that reached to her very soul. She searched to find the source and came across the carcass of a Whale, whose bones had washed ashore. The rib cage bones of the Whale were the source of the magical sound, created when the wind blew through. The Queen was determined to have a musical instrument made which could create this haunting beautiful music she had heard. She could think of nothing else until once again she could hear such beautiful music whenever she pleased. She ordered the court musicians and craftsman to examine the whale bones and come up with a design for an instrument to be made. After many attempts to create an instrument capable of replicating the sounds made through the whale bones, the court craftsman finally were able to come together to complete the task. Together they created an instrument known as the Harp. The Queen was very happy to have magical music played by her court musicians whenever she pleased. This is how the Irish harp came to be and later known as the symbol of Ireland today.

What do I want to know? – The changing of the Flute upon entrance through the dream gate suggests giving up something in order to pick up a new song and follow a new path. I want to know what lies beyond the gateway.

Action – Pick up the tin flute. Play a Harp. Revisit opening the Harp gateway in dreaming.