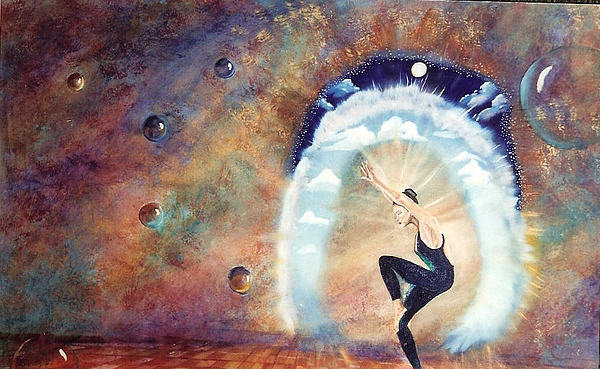 Over twenty five years ago,  I was lead by my dreams to join “Nine Fish Jumping” an improvisational dance performance group, made up of actors, dancers, yoga teachers, film makers, and martial arts practitioners.  We decided to make the group leader”full” where we had no one leader, but all took responsibility for creating the performances.  We built trust among each other, exploring our creative edges and stretching our creative impulses through contact improvisational movement.  One afternoon, as I prepared to leave my house to go to a rehearsal, I suddenly became really drowsy and felt the need to lay down for a minute before going to rehearsal. I lay down and closed my eyes, and suddenly found myself dreaming about a meeting taking place, at a nearby cafe, where the members of our group had gathered. One of them was trying to convince the others that they should vote me out of the group.  I woke up suddenly, and “knew” that this meeting was taking place right then.  I hurried over to the location I had seen in my dream, and found the exact scene playing out. My abrupt uninvited appearance at the meeting,  hindered their chance to proceed with the vote!  They all looked shocked that I was there and nobody said anything to me, in fact they couldn’t even look me in the eyes.  Someone suggested we proceed to rehearsal, so we all went together and began our contact improv warmup exercises. I did not participate, but decided to watch instead. I felt my trust had been broken and I was trying to determine if I could even continue to be part of the group after what had happened.  It was interesting to me, that I was not upset by what I had seen, in fact I felt quite empowered and watched as if from the perspective of an observer in a dream.  After rehearsal, the air was not clear by any means and everyone still felt uncomfortable.  I decided to sleep on it and ask my dreams for guidance about what I should do.

The next night had a dream based on my incubated intention to clarity for myself if there was still a place for me in this group. In my dream, I see myself doing a dance with the woman who was conspiring to vote me out of the group.  In the dance, I saw myself doing movements which were open and made me vulnerable, it was through this openness and vulnerability expressed in the dance, that a resolution was created. It was a dream of healing, through the dance.

In our next meeting together, I chose to share my telepathic dream of seeing the meeting taking place, and also my dream incubation question as to whether I should decide to continue to dance with the group. I suggested recreating the dream I had incubated, by dancing with the woman who had created the power play. She agreed to dance with me and together we improvised recreating the movements from my dream. We were able to move from the space of competition and jealousy toward the energy of openness and vulnerability, in the space we created together. We reached a place of healing and reconciliation, not only for our own relationship, but for that of the group as well.  It only served to deepen the connection we had with one another, and we went on to create many dance performance improvisations over a 2 year period.

The group later disbanded, and individuals moved away and went in different directions, but over the years, that experience stayed with me. It was through this experience, I was later inspired to create “Peace Moves” a program of conflict transformation with conscious movement.  It is a powerful way to deal with conflict from the perspective of wholeness, rather than the polarity of “us” and “them” thinking.  I have also found this format very powerful when working with dreams, which can often reflect the polarities we struggle with in our lives both inwardly and in our external worlds.

Exploring conflict through expressive movement, is also a very effective approach with children.  Years ago,  I taught at an Integrative Arts pilot  program at a private school with children ages 4-7. The program was developed to offer creative materials for children to explore, through their own imaginations and impulses, without someone telling them how to create a project.  They had just about anything you could imagine in the way of choices, such as an array of visual art materials, costumes, musical instruments, even a stage to put on a play or perform a dance.  One thing I observed, was that many of the boys in the class had very limited imaginations as to how they chose to express themselves creatively. They often chose to pick up some of the recycled trash materials we had made available to them, and would inevitably make some type of weapon, which lead to the boys pretending to be fighting one another.  The other teachers and myself grimaced at the sight, and complained about how sad that boys can get stuck in such roles at such a young age. I decided to take a chance, and asked the boys to follow me instead, to the dance floor, where I taught them some contact improvisation exercises. They took to it right away, and were able to dance and connect with one another without needing to resort to games of violence in order to connect.  They were no longer stuck in a “role” and found the world of their imaginations open up to other possibilities to explore.

Our dreams can provide us with doorways into the imagination, where we can transcend the limited roles we have been given and may be trying to live out without any sense of real accomplishment.  Dreams can show us new paths to move towards, if we have the willingness to look and the courage to follow them.

2 thoughts on “Dancing Awake My Dreams”