The Lion came into my dreaming recently and said, “you have not been paying attention to me.” He was old and scraggly looking, and accompanied by several other older Lions who were part of his pride. I knew this Lion, although he looked different than I recalled, I was familiar with an agreement I had made with him somewhere in my far memory. My response to him was, “Oh that.”

My far memory seemed to recall this old friend and guardian as a protector and guardian of the goddess, and so in order to hang around with me, he may be asking me to embody more of that goddess energy in my life. I had the feeling it was time to get on with this part of my life, something I agreed to do along time ago, perhaps lifetimes ago. It was the feeling of time passing and that this promise could not be put off any longer. This lion is getting old and tired, he is hungry and needs to be fed. It is important to feed your power animals if you want them to stay near. This power animal I greeted as an old friend, holds a key to my own power which I seem to be avoiding. He is a guardian of the goddess, and neither he nor the goddess will be put off any longer. I must accept this energy and allow it to lead me into places in my life where I do not yet fully understand my own capacity to hold power as a woman. Even though, I just recently helped organize 2 major events centering around Women’s Human Rights at an International Women’s Summit in Dallas, Texas and another event in Taos, New Mexico for International Women’s Traditions, centering around Women’s Wisdom and Oral Traditions. I have continued to also grow community by nurturing a circle of women who are dreaming forth their own empowerment. Still the Lion is telling me, I am avoiding something. He is starving from my neglect and I must find away to nurture this connection which serves to protect and guide me. The Lion can help me journey to the places where the goddess resides. 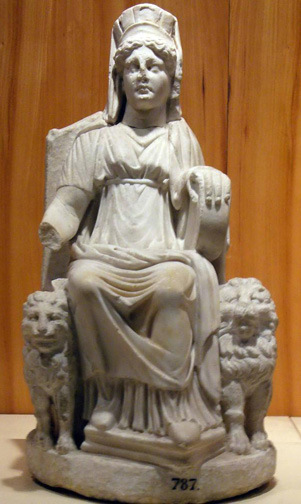 The connection between the Lion and the Goddess is an ancient one, dating back to the Neolithic era in Anatolia and spread from the Phrygian Mountains in what is now modern day Turkey, and enthroned in temples devoted to Kybele throughout the Grecco-Roman world. The Goddess Kybele was depicted on her throne holding her frame drum, flanked by female headed winged lions or riding a chariot guided by Lions. She was known as Magna Mater, Great Mother and brought with her a mysterious stone from Phyrgian Mountains, a conical shaped meteorite known as the Needle of Kybele, which enshrined the power of the Great Goddess to protect the region.