Skip to content
Summer Solstice 2010
The Dream
I am in a dark mountain cave where the light of my soul hovers above dark waters. I see a white tiger emerge from the mountain and sit by the side of the water looking into the darkness. The water surface is covered with a dark, thick, sludge and a being crawls out of the water, its body covered in sludge. The tiger looks at the sludge covered creature and turns her head away, wanting nothing to do with it. The white tiger finally decides to jump into the water, and  the contrast of  her beautiful white fur against the deep darkness in the water is amazing to see. The tiger is a powerful swimmer and moves swiftly through the dark waters until it reaches a place of  murky astral waters, where many spirits are floating. The tiger continues to swim through the murky waters of spirits until the water begins to clear and she is now swimming in the clear open sea.  She finally emerges on another shore with a rope in her mouth from which she is pulling a boat from deep within the ocean waters onto the shore.  Inside the boat is a woman dressed in gold trimmed and maroon colored vestments and wearing a regal shaped head dress. On the shore of the beach is a small girl of about 7  with blond hair and fair features, who runs toward the boat ecstatic to see the new visitors.
The dream shifts, and now I am back inside the mountain cave with the white tiger and the black covered creature still lying beside the sludge pond. The white tiger moves toward the creature and begins to wash it. As the tiger continues washing, it reveals the creature is actually the small girl who was seen running on the beach. The child now lays her head on the huge strong arm of the white tiger as she is lovingly being cleaned, nurtured and restored by her new protector.  EOD 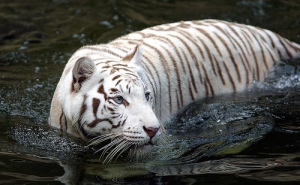 I returned from this experience deeply moved by what I had seen and how deeply I felt it inside my being. I understood it to be a soul retrieval, however it did not feel as though it were connected to me individually. I was later to find part of this story unfold in pictures which were shared with me from a friend and teacher who was in Kyrgyzstan at the time. She was participating in the lighting of the Sacred Fire Ceremony of Uluu Ot where indigenous elders from around the globe had gathered to light the sacred fire on the Summer Solstice under the full moon. I looked through the her pictures of the ceremony and found myself staring back at the woman dressed in traditional dress who was an Altai Medicine Woman. She was dressed just as the woman I had encountered in my dream vision who came riding onto shore in the boat pulled by the White Tiger. I thought about the dream and decided to share it with my friend to see what she thought. She was able to confirm my experience and told me that the mountains of the Uluu Ot are known as Tien Shen, home to the Snow Leopard. During the Uluu Ot ceremony, the Altai Medicine Woman I had seen in dreaming and also a Japanese Medicine Woman, both individually reported seeing the spirit of a young girl dancing around the fire. They realized she had been murdered and her soul wanted to be part of the ceremony.  According to the hosts of the ceremony, a genocidal event occurred on the grounds where the ceremony had taken place. The story goes that while 100’s of men’s bodies were being buried, a young girl came upon the scene. They murdered her too and threw her in the grave along with the other bodies. She was remembered in this ceremony and her soul retrieved.

According to this account, I was connecting in my dream with the Uluu Ot ceremony going on the very same day in Kyrgyzstan, and the soul of this child was restored during the lighting of the sacred fire. She continues to be held and protected by the spirit of the White Tiger.  I give thanks the White Tiger and all of my relations and teachers who share their connection with me in dreaming and the waking world. We are all connected and part of a larger story. I am grateful to participate in this journey of healing the past, while healing the earth.