One thing I have learned to watch for in dreams is the “reality check”. This is an important step included in the Lightning Dream Sharing Method, designed by Robert Moss and practiced as part of Active Dreaming. Our attention to details that appear in dreams, about people, places and things, can offer up time ques to help determine if there is psychic information being relayed of a possible future.

We dream the future often, and the information may be interwoven with other metaphorical or narrative story lines and not presented literally, but for those who “Dream True”, there may indeed be a glimpse of a possible future, which comes visiting in explicit detail. When we pay attention to our dreams, and look through the lens of the “reality check”, we may notice even more slipping through from the other world in the form of synchronicity, deja vu, and serendipity.

Another aspect of the reality check has to do with dreaming into the past, which can not only bring through memories of our current life from our younger self, but also far memories of past lives, or personalities living in parallel dream realities. We may be able to dig into some dream archaeology, for some cross cultural dreaming in another time and place with time travel.

How do you Time Travel in Dreams you ask? Well because time is not a linear concept in dreams, we are not limited by the past, present or future. They all exist in the same moment. It’s all happening right now! Experienced travelers of dreams, understand they are not limited by time or space in dreaming.

Becoming a Time Traveler is as close as your dreams. One of my most interesting dream experiences of time travel came to me from a primordial guide who introduced him/herself as the Keeper of Time.

The Keeper of Time

In my dream standing before me is a being with wings, made of a primordial plasma like energy, full of many beautiful bright colors of light swirling within. Who are you? I asked, and the wise angelic being before me replied, I am the “Keeper of Time” (KOT).

Things got interesting then, when the “KOT” began looking me over from head to toe, and decided it was time I grew my own set of wings, and helped me to do so. A pair of wings sprouted forth from my scapula bones, made from vibrant multicolored plasmic energy. Off we went flying through the dreamsphere, traveling back through time with the “KOT” as my guide.

“Everything is going to be alright”

I  found myself and my traveling companion now standing behind a distraught woman with long blonde hair, dressed in a blue gown wearing a crown. She overlooked a stormy sea with the waves crashing against the castle. She stood there considering her own death, trying to decide if she should go through with it. Her scandal involved a pregnancy with her lover, and not her king. I stood there in my angelic guise whispering in her ear. “You don’t have to kill yourself, everything is going to be alright” She revives new hope and chooses not to go through with her plans to kill herself.

I fly to another destination in time with my guide, where a small girl skips across a field in front of a dark dolmen, where a presence emerges from underneath. It moves in a dark energy form, and spews forth hateful and unspeakable desires toward the innocent girl. I feel horror at the evil hatred that is directed at the girl child, and the dark spirit which desires to own not only her, but all women. She hurriedly moves away from this place of evil, seeking safety from the dark presence she feels stalking her. 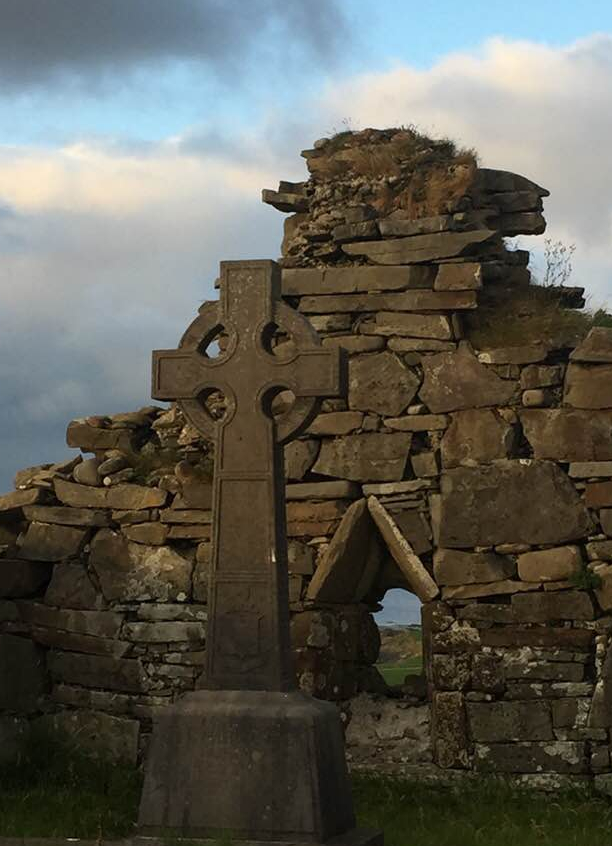 Now I find myself, flying to another time and place with my guide and arrive in the midst of a ceremony taking place. A druid priest, with a grey beard wearing a ceremonial robe and a breastplate of sacred stones, stands in a sacred grove on a small cropping of boulders, with a meager group of priestesses. Together they speak sacred words of enchantment and protection for women, fighting against the scourge of evil, which has become unleashed.

Perhaps these words from St. Patrick’s Breastplate, are some of what was spoken.

I bind to myself today to
The power of Heaven,
light of sun,
brightness of moon,
splendor of fire,
flash of lightning,
swiftness of wind,
depth of sea,
stability of earth,
compactness of rock.

I once dreamed into the past, where I was a potion maker in the heart of a Castle on the coast of Ireland. I was tasked as a healer to keep the community safe and healthy, and made potions from a magical herb garden. The garden was tended by my two elfin assistants. I was in the midst of making a potent potion for an important community ceremony. The elfin helpers went to the garden to collect the ingredients needed, and then we mixed up a potion that looked like brownies, which were baked with the herbs inside, and then stamped with a magical seal. When the magical brownies came out of the oven, they were then brought to the courtyard, where two large tree trunks from ancient trees had been felled, sacrificed for the ceremony. The prepared magical mixture was spread on the surface of the tree trunks, with prayers offered for fertility and the continuation of the clan.

It seems they were loosing numbers of future generations. They launched the sacrificial logs and offerings of prayers into the sea, and they were carried over the waves until reaching me in my time, where I received the dream of the ancestors and their hopes for future generations. The prayers sent were like a message in a bottle, across the seas of time, invoking assistance for what they saw coming, a crisis of human survival on the Earth. The prayers were a plea to make things right in their time, and in mine. I wish I knew how, only my dreams can tell.